Meme Index. Analyzing fads and sensations on the Internet

The Meme of the Internet Index will be the new normal to analyze and predict facts and sensations which go around the Internet. This Index will be generated using Big Data platforms and paradigm. Combining near real time technology to ingest this activity and analytic frameworks to analyze the media content, we will be able to understand what a special group of people full of creativity, the meme creators, want to express and predict things as for example what Big Data framework will be disruptive or on the contrary what would be a bluff

Internet Memes are a subset of the general meme concept that carry an additional property that ordinary memes do not. Internet memes leave a footprint in the media through which they propagate (for example, social networks) that renders them traceable and analyzable. Meme creators are not just anyone, on fact, you can find among publishers: bright and creative minds, influencers, opinion makers and so on. This people don´t express their feedback in any forum and their most valuable vehicle to address their opinion is the meme. Nowadays, it´s possible to build an architecture based on Big Data Platforms to build the Meme Index. We need three layers: The first is to implement a data ingestion of this unstructured information in Near Real Time consuming the different places where people submit this content (http://knowyourmeme.com/, https://www.memecenter.com/, http://memebase.cheezburger.com/, and so on); this layer could be built using Apache Flume developing adhoc-sources and Kafka to store the meme bytes in a message. The second layer consists in converting the meme in something comprehensible, I mean, understand the image and text, for example, using the OpenCv library and other OCR tools; this layer could be developed using spark streaming technology reading, processing, and writing of a kafka topic. The third layer is the advanced analytics zone that analyzing all these messages The Meme Index could give a significant insight over what will happen in the future for example what Big Data framework will be disruptive or on the contrary what would be a bluff. As a result, The Meme Index is an extraordinary tool to capture fads and sensations that tend to grow rapidly on the Internet because the instant communication facilitates word-of-mouth transmission and discover significant insight. The most attractive thing of Meme Index is to think that this content is provided by common and intelligence people using the humor to express something. It´s a very special media content that you cannot find in anyplace more. In short, I would like to present these two ideas, the Meme Index to predict fads and sensations on the internet and the Big Data architecture to do this this thing, starting off ingesting the meme and finishing building the Meme Index. The session should be driven by Memes/Slides, obviously. 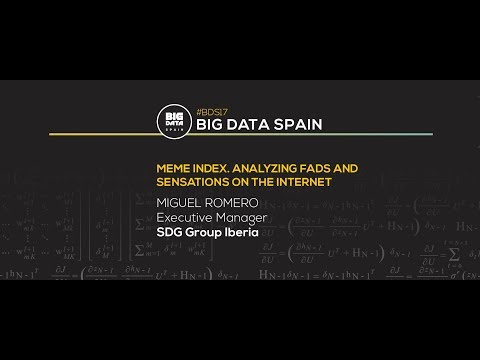